To Be Stuck Or Not To Be Stuck...That Is The Question 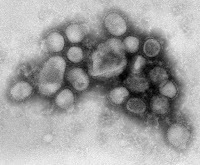 Everyone is asking these days: "Will I get the H1N1 flu vaccine?" I'm still debating that myself although I probably will get it considering where I work; Daffodil Place, where everyone is seriously ill and someone around them with an airborne illness could be fatal. I also have a 5 year old, who is very susceptible to getting the flu and possibly H1N1. But I have a problem with the way this H1N1 flu is being projected.

I believe the press has blown the situation way out of proportion. For instance, the United Nations Health Agency has reported to date just over 4735 deaths worldwide directly related to the H1N1 flu. On the other hand, since the beginning of this year, 2009, the World Health Organization has reported almost 500,000 deaths, worldwide, directly related to just seasonal flu. So why the panic in the press? Even the Centers for Disease Control has reported that on average, 36,000 people die every year in the United States from just seasonal flu.

At first when I heard about a vaccine being available, I thought that it was going to be distributed by family doctors. The doctors could then charge their exorbitant price to the provincial health program and make a lot of money. I was surprised when they announced it would be distributed by public health nurses and it would be free of charge.

So it would seem that the governments will be absorbing the cost of this vaccine. But I still have to ask why all the panic? Do the government and health agencies know something that they are not telling us? It does seem that by all accounts the H1N1 flu is going to get worse before it gets better but will we really be looking at the same counts of deaths that the seasonal flu has brought on throughout the last year. If so then maybe I'll start to panic. Until then I guess I'll have to get stuck and see what happens in the coming months.