The Ghost Of JPL - Reposted

It was 5:00 am on March 10, 2000. For anyone who is familiar with JPL, there is a restaurant just off the Great Hall called the Moose’s Nook. In this restaurant was a large server station which I used to get clean water for various cleaning projects. I was employed as a Public Area Houseperson at this time.
On this particular morning I was at the server station which was located in an area where I could see the entire dining room including all exits. I filled up my bucket with water and proceeded to leave the server station and something caught my eye. Near the back and to the left, sitting at a table was an elderly lady. She had short grayish coloured hair and was wearing a dark blouse and what looked like an old style apron, with the straps made of a white frilly material. I could only see her from the chest up as she was sitting with her arms on the table in a folded position. Her head was leaning forward as if she was praying.

Now in a hotel the size of JPL we would always get guests early in the morning looking for breakfast. As all the lights were on in the restaurant, I assumed she thought the restaurant was open for breakfast and looked as though she was waiting for someone to join her.

Turning toward the lady I said in a louder than normal voice, “Good Morning, May I help you?” Her head started to rise just as I took my eyes off her and focused on the chairs I was walking around so I would not fall down. Resuming my glance a split second later in her direction, I felt a cold rush of air run through me. The lady was gone. I immediately had goose bumps run up my spine. (I still get them even now as I write this.) It was physically impossible for any human to leave through one of the 3 exit doors in the split second I had taken my eyes off her. I stood there for a few minutes just staring, as I was in disbelief of what just occurred.

I left the Moose’s Nook and started walking toward the Front Desk. A Security Officer and the Night Auditor were standing outside the desk chatting and when they saw me, as they told me later, I was a pasty white. They asked me immediately what was wrong as they could see something happened. I told them of my experience and the Security Officer went with me back to the restaurant and I showed him where the lady was sitting. I immediately got goose bumps again as I approached the table where the elderly lady was sitting. Arriving at the table, we saw that a chair was moved out and tipped over backward as if someone got up in a hurry.

Needless to say word spread very quickly about this incident. I did some research and apparently there have been ghost sightings throughout the years at JPL. One in particular involves an elderly husband and wife. The wife was always seen in the dining room, the husband was always wandering on the outside. The story was that this lady would be always sitting in the dining room waiting for her husband to come and eat.

Upon further research I was shown a photograph from the dining room taken in the 1920’s. The photograph was suppose to be of a ghost and showed an empty dining room with a shadowy figure sitting at one of the tables. As I stared at the photo, my jaw dropped. It looked to be the same lady I had seen!

To my knowledge, at least up until I left Jasper in May 2002, the actual photograph was hung in the Great Hall near the Moose’s Nook. I was told the story of my encounter was also mentioned at employee orientation. I had become a small part of the legend of the ghosts. To this day, I still can’t believe what my eyes saw that early morning at Jasper Park Lodge.
____________________________________
I reposted this story because I have met a new friend online who just visited Jasper Park Lodge and has read my story from May 20, 2007 on this blog. To my surprise she took a photo of the picture of the ghost of which I mentioned in the story and sent it to me! Thanks so much Nancy!
Can you spot the ghost of the lady sitting at the table?? That is the lady I saw on that morning of March 10, 2000! Still gives me goosebumps just looking at it!! 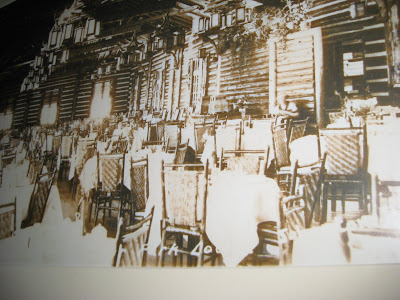